Man oh man! What a night in O.C. landia. Let’s begin the recap shall we?

Heather, Meghan and Shannon all met for a liquid lunch of champs, wine, grey goose with soda water and extra lime (guess who had that drink?) I am certain they had some sustenance, but they also had a big old serving of extra gossip to fill their bellies. About who and what else? Brooks and his alleged cancer diagnosis.  Gossip and booze? What else are we expecting from these gals? Meghan would not change the record.

What I really found alarming was when Meghan said she phoned Brooks’ oncologist to “get to the bottom of this.”  Why Meghan? Maybe Vicki is right. Maybe you should be working. Then you would have less time on your hands to call people’s doctors to prove they don’t have a life-threatening disease. Bizarre! Then even Shannon and Heather began to doubt Brooks’ diagnosis. Shannon of all people! The woman who was in tears last week because people were doubting her dear, dear friends and she could not stand for it.

Would not change the record………

Meghan is on a mission to prove Brooks’ deceit. I doubt this is because she is so concerned for him. Not in the least. I think she dislikes Vicki and is hell-bent on proving her wrong and making her life hell. Vicki was very negative and vocal regarding Meghan’s lifestyle during their Bali vacation. Vicki did not hide her opinions about Meghan not working and just being a step-mom and not a “real” mom, so I truly think this is Meghan’s passive-aggressive way of pay back time. She was hurt by Vicki and she wants to hurt her in return.

Would not change the record…….

Next, we move onto the date with Tamra’s mom. Tamra feels her mom has been single  too long and is need of a man. Not much to say here, but I do have one question and one comment.  Tamra said her mom is 60. Tamra is around 48? So this would mean her mom had her when she was only 12. Eeek! The comment is what the heck with that date? Tamra’s mom looks like a youthful and vibrant lady. One night of passion and that guy would be in the ER. C’mon Tamra. Help momma out with a more suitable match.

Okay, done with Tamra’s mom’s love life or lack thereof. Back to the broken record.

Later Shannon primped with hair and make-up, prettying herself for her Asian themed Aries party. A party for those who share this zodiac sign. There were Ariestinis, a dragon in her pool, a lot of cute themed appetizers and a lot of drama. Helloooooo! Wowza!

The party began with the ladies, gathered around the pool, chatting about you guessed it. The Brookster.

Again they doubted his cancer. Again they found it odd he halted all chemo sessions. Again, Meghan admitted outright to doing something even more bizarre than calling his oncologist. She called Brooks’ ex girlfriend to question her about Brooks and his past with cancer. She even looked proud of her investigative work. Tamra’s jaw dropped and she looked as though she wanted no part of this odd behaviour. Just as the gossip sesh continued, Vicki walked into the party with Brooks. Luckily she didn’t hear what they were talking about. Heather high-tailed it away. She said she could not bring herself to be all like, “hey honey, you look so gorgeous” after spending the past hour talking about her. All was good until Brooks and Vicki pulled Meghan and her husband Jimmy aside to have a “tete a tete” with them.

Inside Vicki and Brooks very calmly said that his diagnosis was none of Meghan’s business and they found that calling his ex was not appreciated, weird and to just stop. Brooks asked a very valid question. What was Meghan’s motivation for digging about whether or not he is sick. Meghan gave some odd response about, “being a very inquisitive person who will research until she finds the answer she is seeking.”  Then what? Why Meghan? These people are not asking you for thousands to go-fund them for a cure. They are not dipping into your Louis Vuitton allowance. They are not asking for you to clean their house or cook their meals to help out while Brooks undergoes treatment. LOL. Okay who am I kidding? They would never ask you to step near their kitchen. They are asking for nada. I loved Jimmy’s reaction. He just looked at his man-icure, probably thinking about all the drinks and food he was missing out on at the party on the patio. I was very proud of Vicki’s reaction. She was very calm and did not screech or scream or storm off. Maybe she is mellowing out in her old age. She is after all the OG of the OC.

There was none of this behaviour: 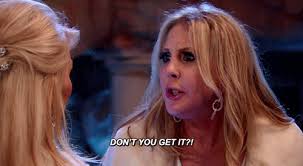 The party ended of course on a low note for the woman. Meghan said something to Tamra about Brooks saying she was not a reliable source. I swear these ladies deliver gossip faster than UPS express mail. As Tamra got in Brook’s face, pointing and screaming, Meghan simply stood back and smirked over the scene she had created. I must say, I have a new-found respect for Jimmy Edmonds. He told his wife to just stop this nonsense now, and I could see the maturity difference between these two people. However, the record never did change……

As for the men? They were happy. Jimmy went back to Eddie, Christian and Terry and they stuffed their faces with good food and did shots. Not a worry among them.

I guess I wouldn’t have much of an exciting recap if it were House Husbands of The O.C.

And that my dears, end my recap. Cue music if you please.